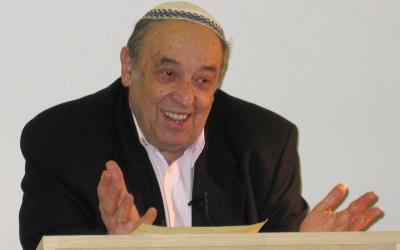 Shikl Fishman, whose love of Yiddish led him directly to become one of the founders of sociolinguistics and a researcher/defender of at-risk languages, was a leader of the Federation of Yiddish-Speaking Youth, in which my late wife, May, and I participated in the 1940s. The Federation—whose former publication, Yugntruf, continues to this day—was the only Secular Jewish group to involve all the politically-separated Yiddish movements, from far-left to centrist.
Shikl was a graduate of the Arbeter Ring (Workmen’s Circle) schools in Philadelphia. (An extensive biography appears on Wikipedia.)

Of him, another leader in sociolinguistics wrote:

Fishman’s research embodies the integration of Jewish scholarship with general linguistics. […] Jewish linguistics, the exploration of Jewish languages such as Yiddish, has shaped general sociolinguistics. Throughout history Jews have been multilingual immigrants, resulting in Jewish languages embodying intricate and intriguing mechanisms of language contact and identity. These languages were thus fertile ground for the establishment and evolution of the sociology of language in general. Given the importance in Judaism not only of mentshlikhkayt (humaneness) but also of education and ‘on-the-other-hand’ dialectics, it is not surprising to find the self-propelled institute Fishman trailblazing simultaneously both in Yiddish scholarship in particular and in the sociology of language in general.